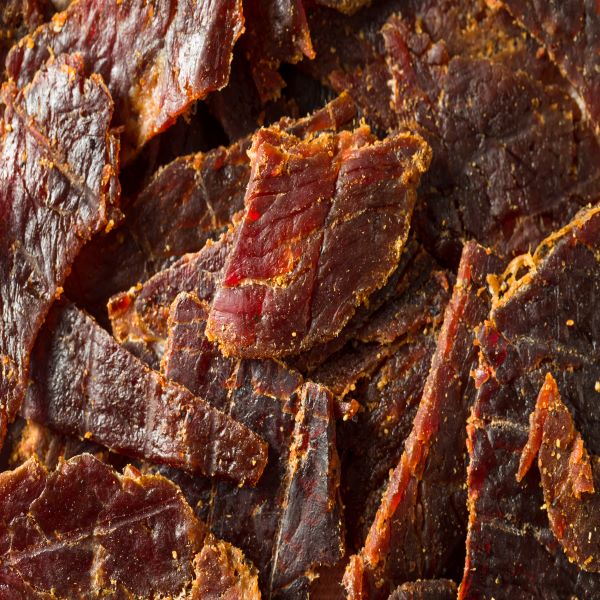 Know All There is to Know about Jerky

Posted under:   hints & tips,  getting started

When raw meat or poultry is dehydrated at home - either in a warm oven or a food dehydrator - to make jerky which will be stored on the shelf, pathogenic bacteria are likely to survive the dry heat of a warm oven and especially the 130 to 140 °F of a food dehydrator. Included here is the scientific background behind drying food to make it safe and the safest procedure to follow when making homemade jerky.

The origins of Jerky.

This product is a nutrient-dense meat that has been made lightweight by drying. A pound of meat or poultry weighs about four ounces after being made into jerky. Because most of the moisture is removed, it is shelf stable - can be stored without refrigeration - making it a handy food for backpackers and others who don’t have access to refrigerators.

Jerky is a food known at least since ancient Egypt. Humans made jerky from animal meat that was too big to eat all at once, such as bear, buffalo, or whales. North American Indians mixed ground dried meat with dried fruit or suet to make “pemmican.” “Biltong” is dried meat or game used in many African countries. Our word “jerky” came from the Spanish word “charque.”

How can drying meat make it safe?

The scientific principal of preserving food by drying is that by removing moisture, enzymes cannot efficiently contact or react with the food. Whether these enzymes are bacterial, fungal, or naturally occurring autolytic enzymes from the raw food, preventing this enzymatic action preserves the food from biological action.

What are the types of food drying?

There are several types of food drying. Two types of natural drying - sun drying and “adibatic” (shade) drying - occur in open air. Adibatic drying occurs without heat. Solar drying sometimes takes place in a special container that catches and captures the sun’s heat. These types of drying are used mainly for fruits such as apricots, tomatoes, and grapes (to make raisins). Sun drying is not recommended for making meat jerky due to a lack of a steady heat source and the potential for contamination from animals, insects, dust, and bacteria.

Drying from an artificial heat source is done by placing food in either a warm oven or a food dehydrator. The main components of an electric food dehydrator include:

Why is temperature important when making jerky?

Illnesses due to Salmonella and E. coli O157:H7 from homemade jerky raise questions about the safety of traditional drying methods for making beef and venison jerky. The USDA Meat and Poultry Hotline’s current recommendation for making jerky safely is to heat meat to 160 °F and poultry to 165 °F before the dehydrating process. This step assures that any bacteria present will be destroyed by wet heat. But most dehydrator instructions do not include this step, and a dehydrator may not reach temperatures high enough to heat meat to 160 °F or 165 °F.

After heating to 160 °F or 165 °F, maintaining a constant dehydrator temperature of 130 to 140 °F during the drying process is important because:

Why is it a food safety concern to dry meat without first heating it to 160 °F?

The danger in dehydrating meat and poultry without cooking it to a safe temperature first is that the appliance will not heat the meat to 160 °F - a temperature at which bacteria are destroyed - before it dries. After drying, bacteria become much more heat resistant.

Within a dehydrator or low-temperature oven, evaporating moisture absorbs most of the heat. Thus, the meat itself does not begin to rise in temperature until most of the moisture has evaporated. Therefore, when the dried meat temperature finally begins to rise, the bacteria have become more heat resistant and are more likely to survive. If these surviving bacteria are pathogenic, they can cause foodborne illness to those consuming the jerky.

What research findings exist on the safety of jerky?

Marinating meat doesn’t make raw meat safe. “Marination alone did not result in significant reduction of the pathogen compared with whole beef slices that were not marinated,” concluded the study.

In the jerky studies, some samples showed total bacterial destruction and other samples showed some bacterial survival — especially the jerky made with ground beef. Further experiments with lab-inoculated venison showed that pathogenic E. coli could survive drying times of up to 10 hours and temperatures of up to 145 °F.

A study by the Harrisons and Ruth Ann Rose, also with the University of Georgia, was published in the January 1998 Journal of Food Protection, Vol. 61, No. 1. The authors analyzed ground beef jerky made with a commercial beef jerky spice mixture with and without a curing mix containing salt and sodium nitrite.

They concluded, “For ground beef jerky prepared at home, safety concerns related to E. coli O157:H7 are minimized if the meat is precooked to 160 °F prior to drying.”

What are the USDA Meat and Poultry Hotline’s recommendations for making homemade jerky?

Research findings support what the Hotline has been recommending to callers. Additionally, safe handling and preparation methods must always be used, including:

Are there special considerations for wild game jerky?

Yes, there are other special considerations when making homemade jerky from venison or other wild game. According to Keene and his co-authors, “Venison can be heavily contaminated with fecal bacteria -- the degree varying with the hunter’s skill, wound location, and other factors. While fresh beef is usually rapidly chilled, deer carcasses are typically held at ambient temperatures, potentially allowing bacteria multiplication.”

Is commercially made jerky safe?

Yes, the process is monitored in federally inspected plants by inspectors of the U.S. Department of Agriculture’s Food Safety and Inspection Service. Products may be cured or uncured, dried, and may be smoked or unsmoked, air or oven dried. The following terms may be on processed jerky products:

What is the safe storage time for jerky? 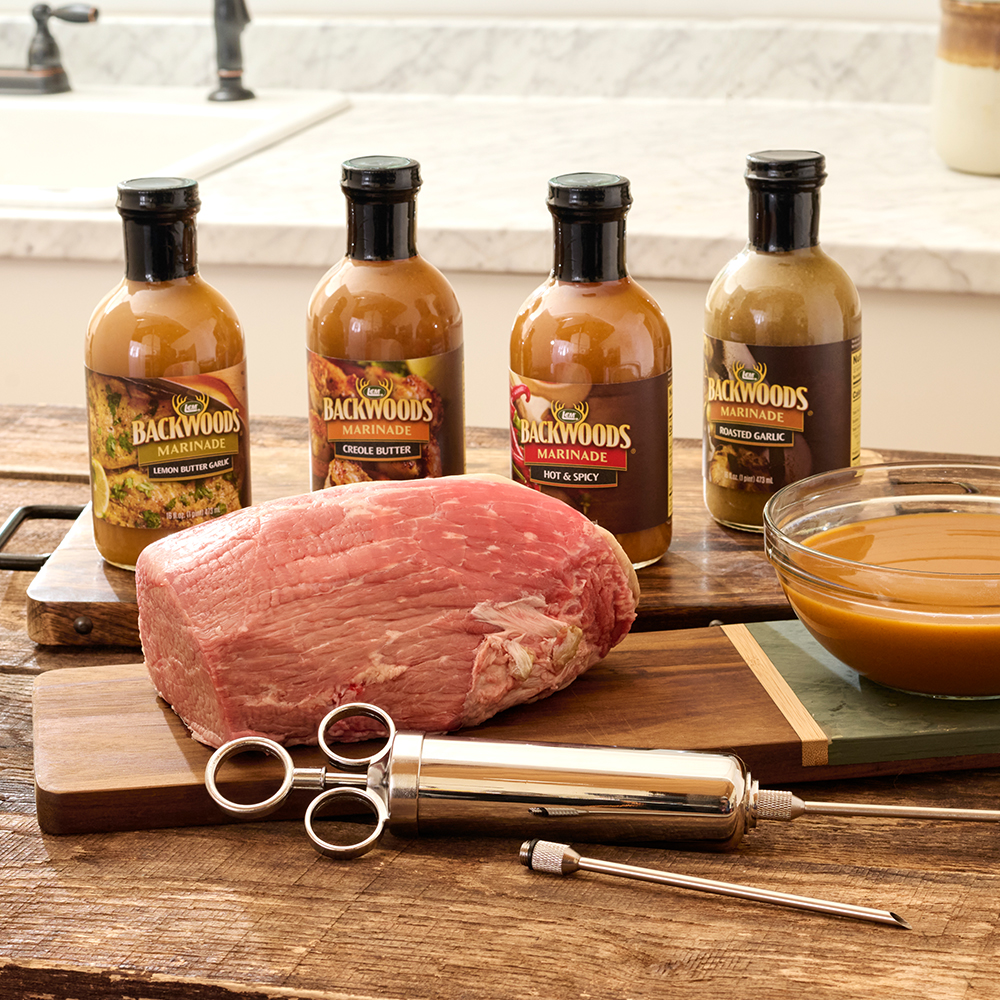 Marinades are made of oil, vinegar, and spices to tenderize meat by softening the connective tissue. They have several advantages that you should be aware... 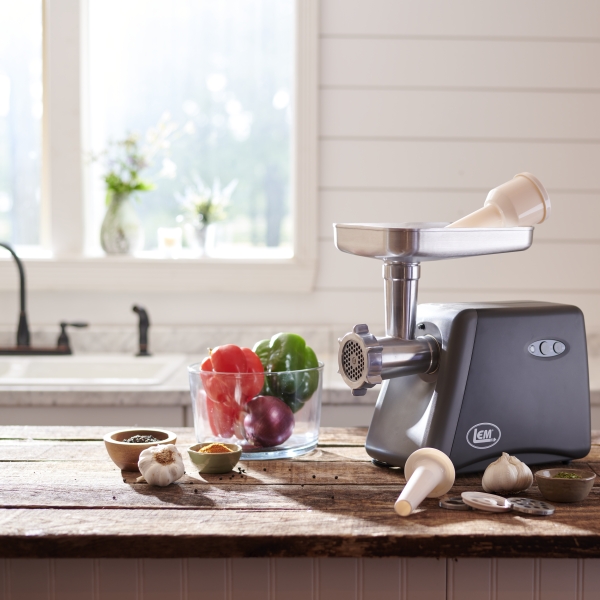 Tender Meat for the Holidays

There is something special about tender meat for the holidays. Learn how our meat tenderizers and processing tools can take your holiday meal to the...